Strength and stiffness.  The balance between these qualities forms the basis for any structural foundation.  The general hull structure of a ship focuses on distributed pressures, like hydrostatic pressure of the ocean.  But our ships also include many concentrated loads, like the pedestal of a crane or a main engine.  The art of foundation design finds an efficient arrangement to redistribute these concentrated loads into the general ship structure.  Today, I review basic strategies for foundation design.

The word “foundation” applies to nearly every piece of deck reinforcement on a ship, from the little stanchion up to the 5000 MT construction crane.  None of the smaller foundations require any intensive design effort.  For those, we apply extra strong structure and don’t worry about any excess weight.  It only adds a few extra pounds of weight.  On commercial ships, the paint alone weighs more.  But with larger loads (like deck cranes), an inefficient foundation results in hundreds of tonnes extra structure.  Extra steel that we need to pay for.  Extra labor to assemble it.  Extra cost that was simply not necessary.

The art of foundation design tries to minimize the unnecessary cost.  Only put the structure where we need it.  Previous to finite element analysis (FEA), foundations we limited our foundations to simpler arrangements that were safely analyzed with first principles and hand calculations.  Thanks to the widespread use of FEA, we now have the freedom to identify the high stress spots, get creative, and build structures that follow the physics.  End result:  efficient foundations.

2.0 The Advantages of Efficiency

Efficient structures don’t seem that important, until you consider the cost implications.  Sure, lighter structures require less fuel.  But they also mean large savings for the shipyard.  Table 2‑1 shows the estimated cost savings for three foundation designs.  When we account for the cost of fabrication, cost savings quickly add up.  The last foundation was estimated at over $61,000 less!  Think what you could do with that extra cash.

Even better, these savings come relatively cheap.  Table 2‑2 compares the cost savings against the engineering effort required to achieve them.  Foundation 3 showed an ROI of over 1000%!  Imagine getting a 10:1 return on your investments.  When it comes to structural foundations, engineering optimization makes a good bet for savings.

3.0 The Physics of Loads

Most foundations include some type of dense structure joining to a deck on the ship.  For the remainder of this article, I will work with a single example:  the foundation for a fictional pedestal crane on a barge.  (Figure 3‑1)  This pedestal imparts a large bending moment and large downward force. 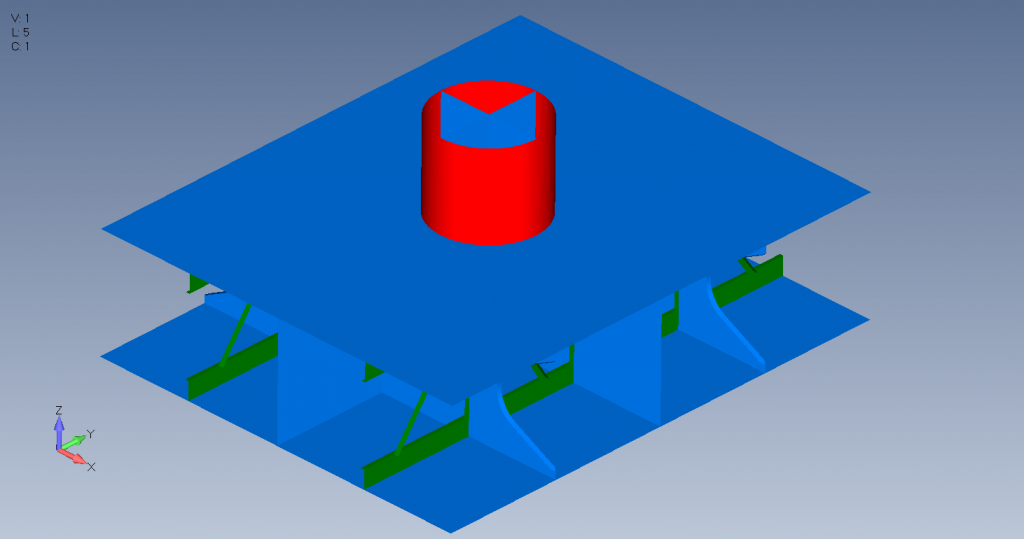 First, we need to understand how this pedestal imparts the stresses to the deck.  We may think that a uniform pedestal means uniform load distribution.  Nope.  The bending of the pedestal concentrates the stresses to two sides.  When we examine the regions of high stress (Figure 3‑2), this pedestal actually acts like the top and bottom flanges of an I-beam. 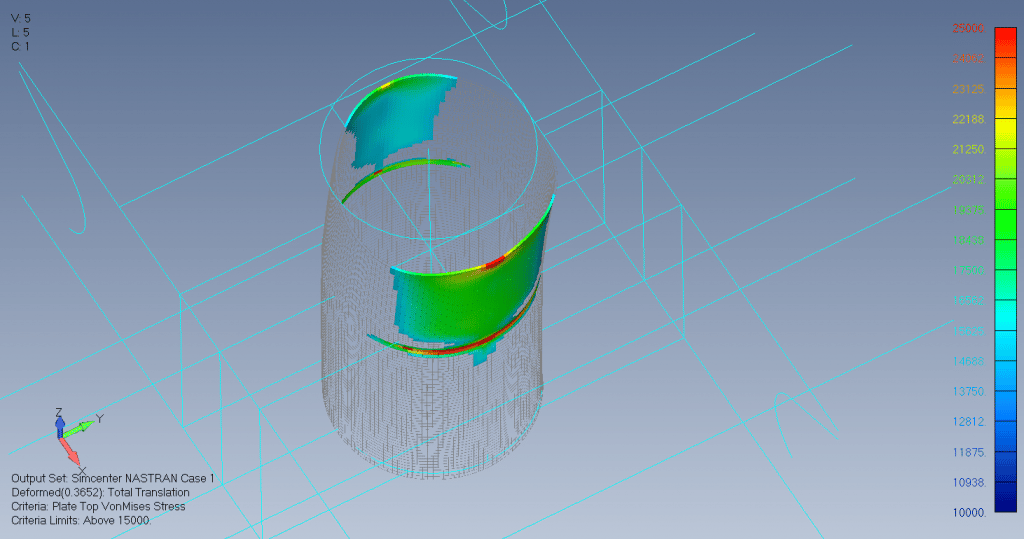 The second challenge is the direction of our loads:  it changes.  Figure 3‑2 shows the stress pattern for only one orientation of the crane.  As the crane rotates, so does the stress pattern, which is why we use a circular pedestal.  Our foundation needs to accept loads from any direction.  And we need to transition the stresses from our circular pedestal over to the ship structure, which uses a rectangular grid layout.

4.0 The Physics of Foundations

The keys to a good foundation are strength and stiffness.  We want a strong structure that maintains similar stiffness as it distributes the stresses.  Not all parts of the structure should be equally stiff.  We need to recognize the natural stress paths and place our stiff structure along those paths.  FEA certainly helps with seeing the stress paths, but FEA only shows results for the structure you specify.  It takes experience, and a little experimentation, to see past the current structure and find where the stresses want to go.

The physics behind this strategy requires background information on stress patterns, interaction between geometry, strain, material stiffness, and common design practices.  A full explanation is beyond this article.  For now, I will over-simplify to a few general rules.

That last point is critical.  Figure 4‑1 through Figure 4‑4 show deflection of the same structure loaded with the same force, just in different directions.  The deflection plots were exaggerated to show the shape of deflection, but the color map matched the same scale for all plots.  Notice that the out of plane forces exhibit far more deflection (Figure 4‑3 and Figure 4‑4).  More deflection means lower stiffness. 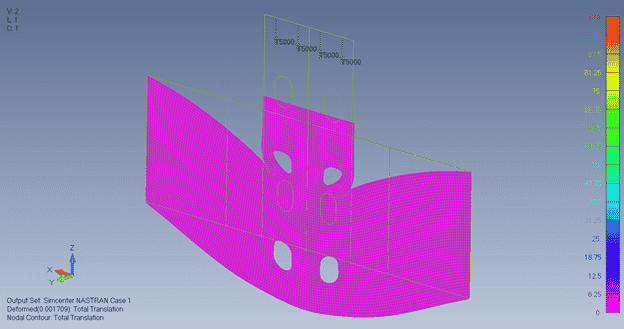 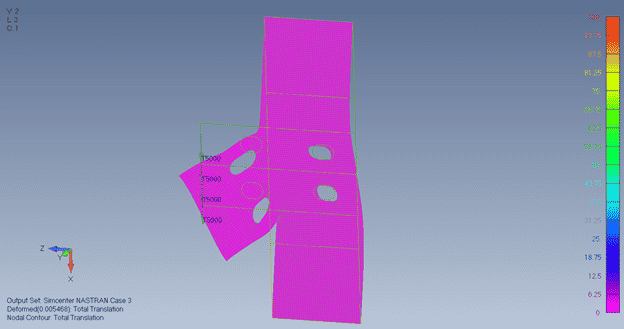 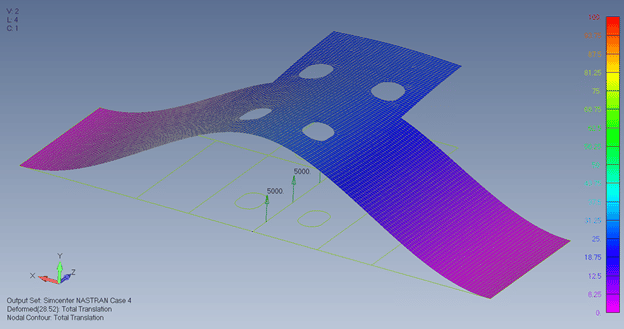 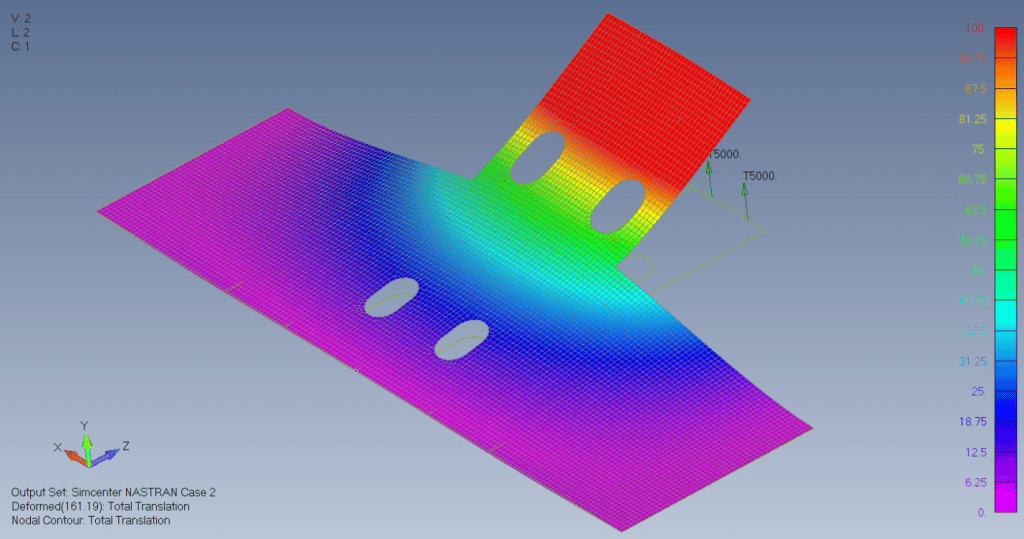 This creates problems with interactions in the complex structure of a ship hull.  Multiple structures intersect, deflecting in different ways, and reacting to different load directions.  Ideally, these diverse structures should match to the same stiffness at each intersection.  Practically, that never happens.

All these physics coalesce into guidelines for foundation design, most of them contradicting each other:

No wonder a good foundation can be difficult to design.  The pursuit of a perfect foundation becomes an eternal quest, guided by personal preferences, opinions, and different priorities.

I don’t think anyone ever created a perfect foundation.  But the pursuit of perfection still produces major improvements.  The following three examples show how I started with a typical foundation and then attempted two new arrangements to improve that design.  This process of refinement ultimately discovered a foundation 19% lighter, which saved approximately $60,000 in fabrication costs.

One caveat:  these foundations were created for demonstration only.  Keen observers may notice that sections of the foundation were overloaded.  I intentionally left them unrefined.  A true foundation for contract work receives further refinement, investigation of multiple load conditions, and a larger, more detailed FEA model.

Any foundation design begins with picking the right location, someplace with ship structure already oriented for good stiffness in the vertical direction.  With our barge, the only things that qualified were vertical bulkheads subdividing the interior.  The crane pedestal sat on the intersection of two vertical bulkheads, an ideal start for this design. (Figure 5‑1)  We then added some transverse bulkheads and two new side longitudinal bulkheads.  The intent was to partially support the pedestal with these side bulkheads. 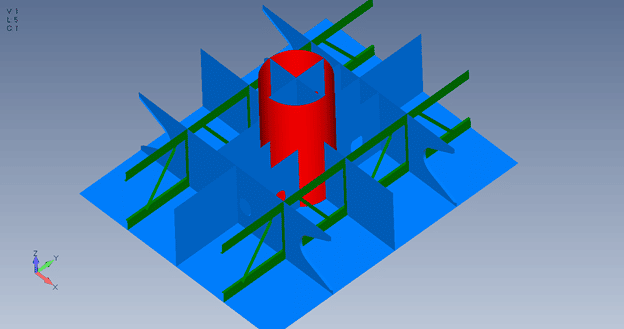 The stress patterns (Figure 5‑2) show a different story.  The center bulkhead took most of the load, with little action on the side bulkheads.  The critical stresses (Figure 5‑3) also showed a sharp peak just as the pedestal entered the main deck.  Many parts of this structure were vastly under-utilized, and the side longitudinal bulkheads did little to distribute the loads from the crane.  A good start, but there is room for improvement. 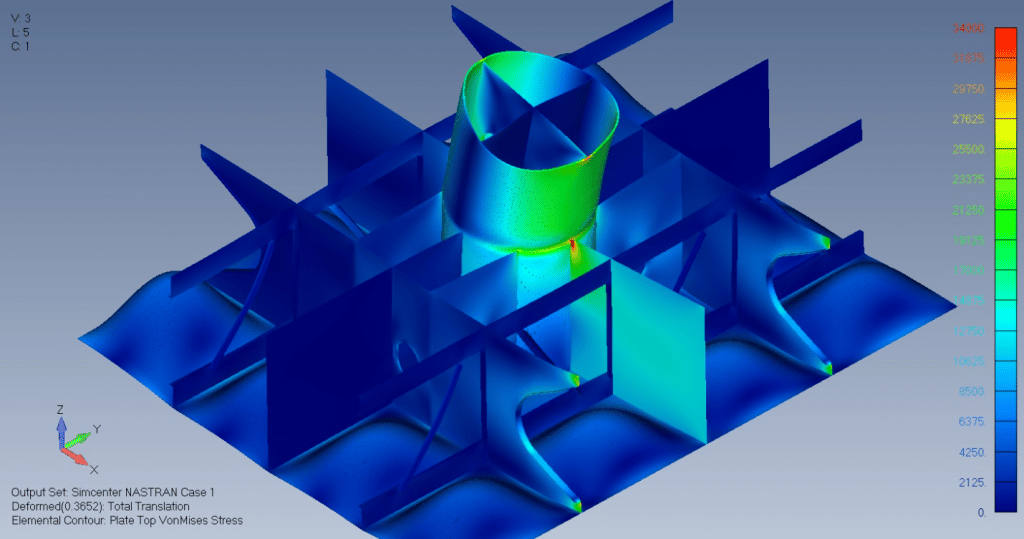 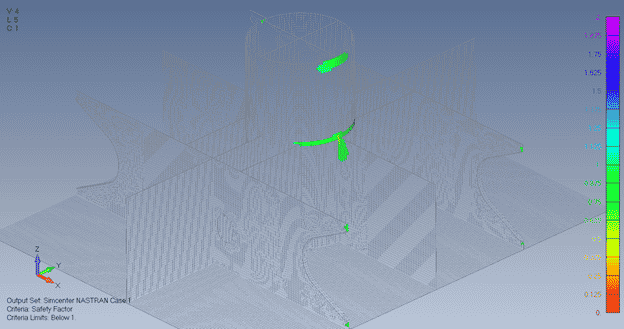 Foundation 2 tried to address the different orientations of the loads by first transitioning from a circular pedestal to a larger box structure. (Figure 5‑4)  Four bulkheads attached to the pedestal, dividing it into four quarters.  Within each quarter, a deck beam attached to the pedestal, reinforced with brackets above and below the deck.  This heavy reinforcement tried to match the stiffness of the bulkheads.  The arrangement created eight strong points, equally spaced, to divide the stresses and carry them to the surrounding box structure.  This box structure then became the stiff point to distribute the stresses to the rest of the ship. 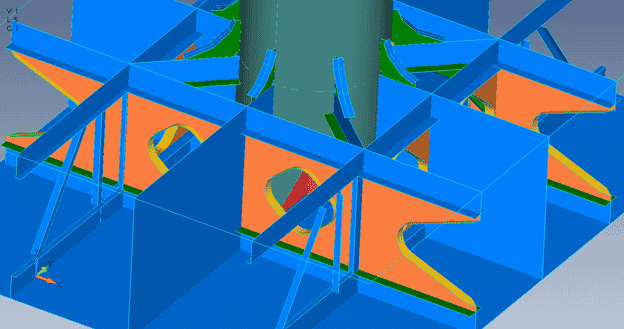 The box geometry also tried to reduce weight.  Foundation 1 showed little stress in the side bulkheads.  To reduce weight, Foundation 2 included large cutouts for these bulkheads and reinforcing beams at the top and bottom, where most of the action happens.  We also addressed the stress spikes at the main deck by adding brackets above deck.  Brackets create a transition between the flexibility of the pedestal and the sudden stiffness of the main deck.

Did all these changes work?

Figure 5‑5 shows the stress distribution, and Figure 5‑6 highlights the critical regions that exceeded material limits.  (A successful foundation should have no critical regions.)  The side bulkheads showed better utilization (higher stress) this time, and the angled beams carried some load.  But the centerline bulkhead still took most of the load.

The cutouts in the side bulkheads may have reduced weight, but we added much of that back with the reinforcing collar around each cutout.  Total weight reduction was minimal.

This design also fell short of its goal.  We saw some improvements, but no significant change to promote Foundation 2 over Foundation 1. 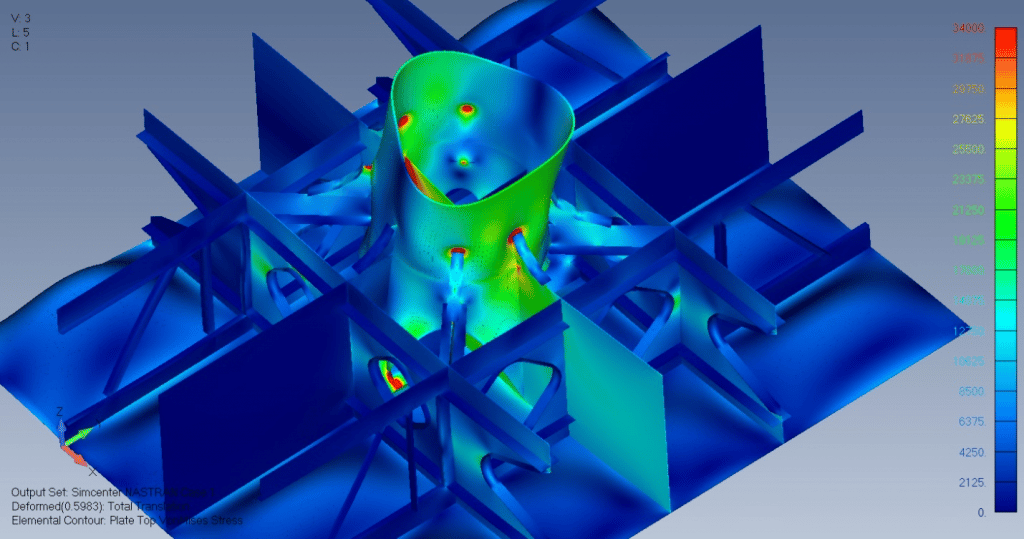 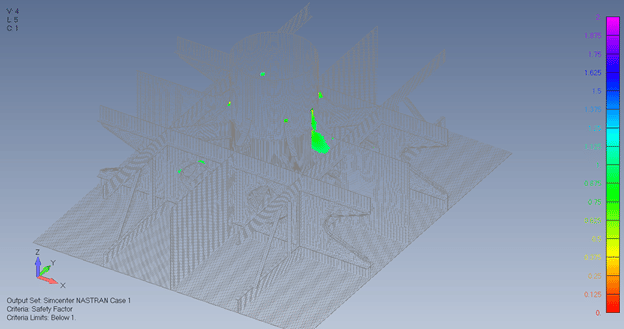 This design was a bit more radical.  Did it work? 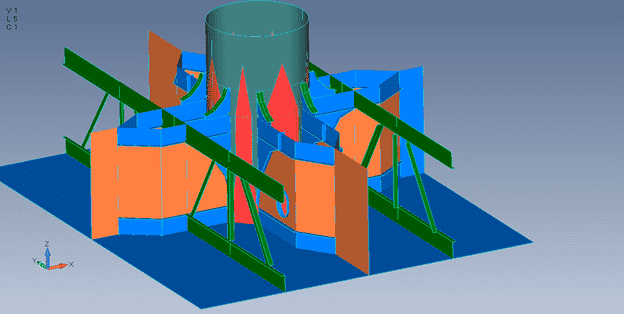 The stress pattern in Figure 5‑8 showed a more even loading along the bulkheads.  The critical stresses in Figure 5‑9 only showed a few hot spots.  And the reinforcements successfully redirected the loads into the deck and bottom shell.  Due to the better stress distribution, I could reduce the scantlings for most of the bulkhead plating, saving significant weight.  Overall, a major improvement.

This foundation also varied the thickness in the pedestal, creating strong legs that naturally direct the stresses towards the bulkhead interface.  That idea was less successful, owing to the balance between stress and stiffness.  Any pedestal change thin enough to redirect the loads was also too thin to carry the stress.  No design is perfect, and we learn something new each time. 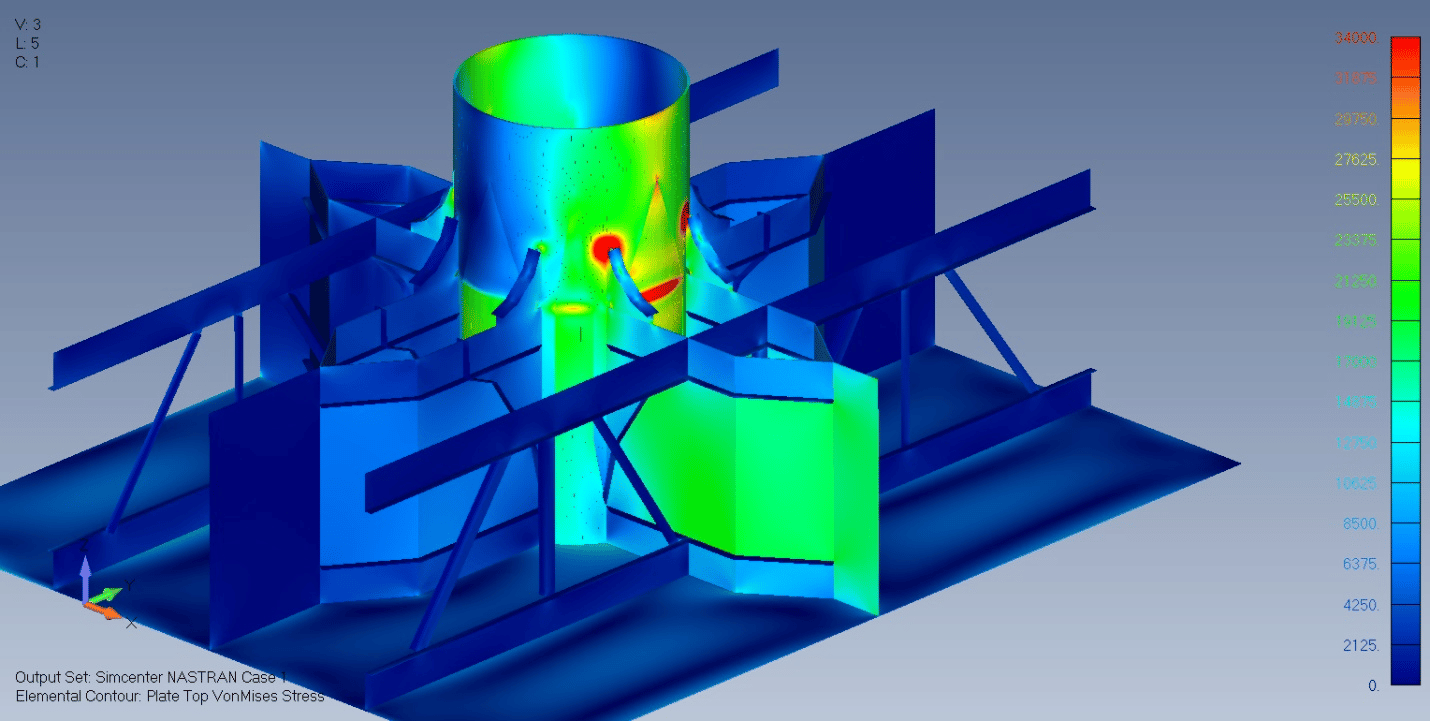 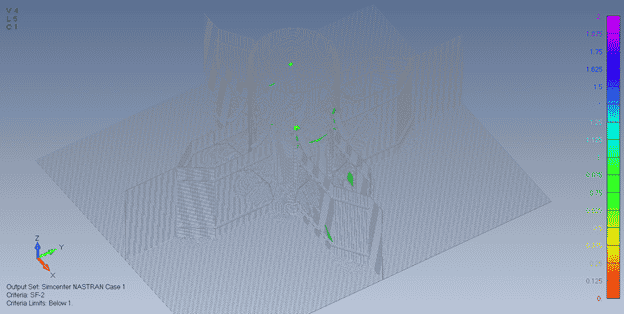 No foundation is perfect.  Each design reveals new insight and opportunities for further improvement.  That is the art of foundation design:  balancing strength and stiffness.  It takes creativity to see potential stress patterns and experiment with solutions.  But creativity pays off with better efficiency, lighter structures, and lower fabrication costs.  Not quite perfect, but always one step closer. 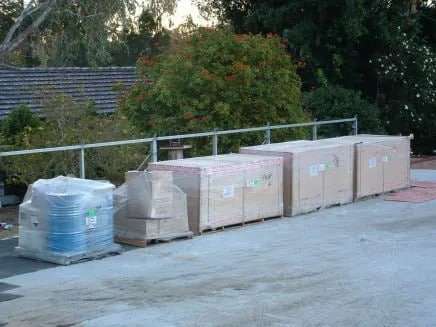 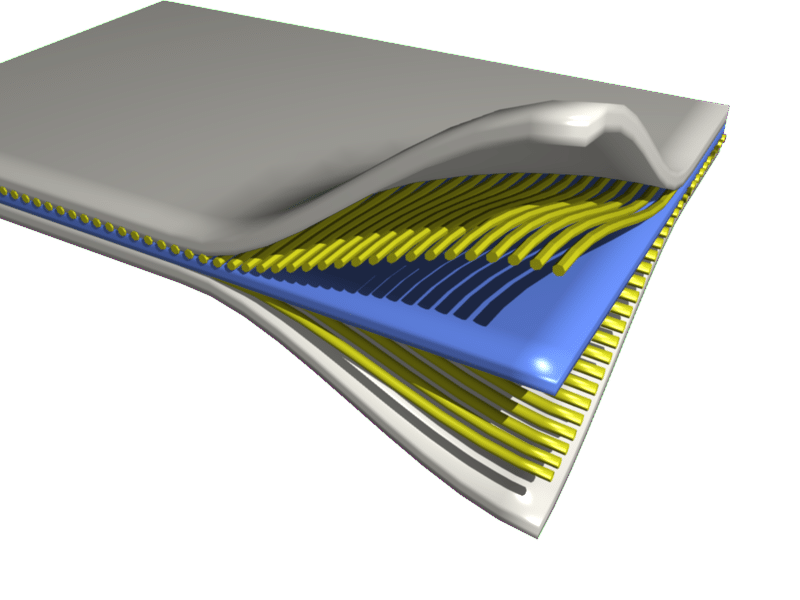 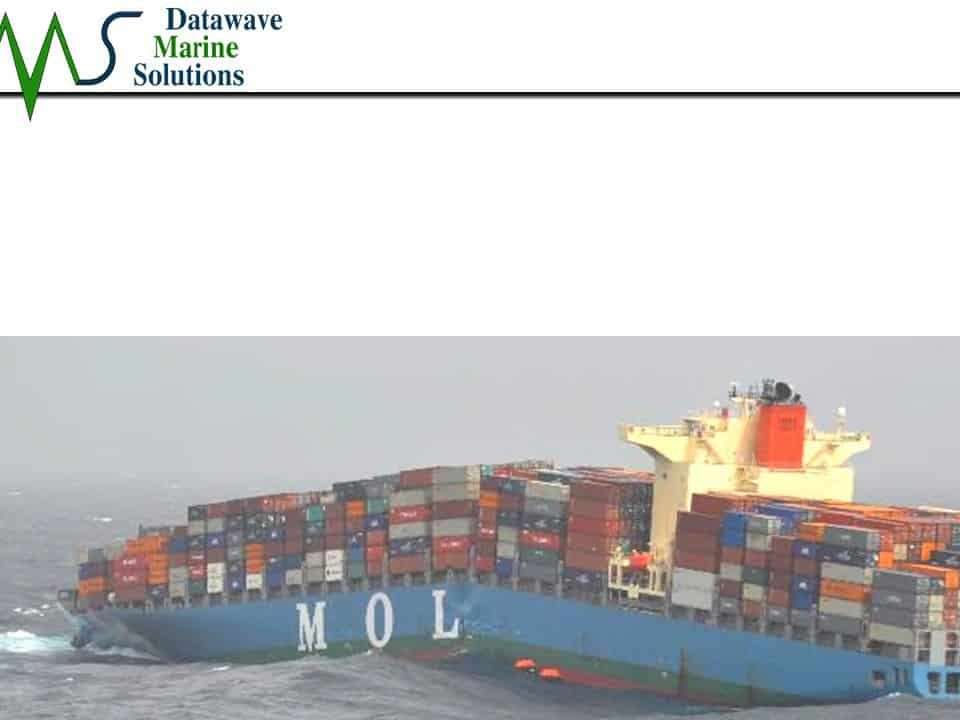 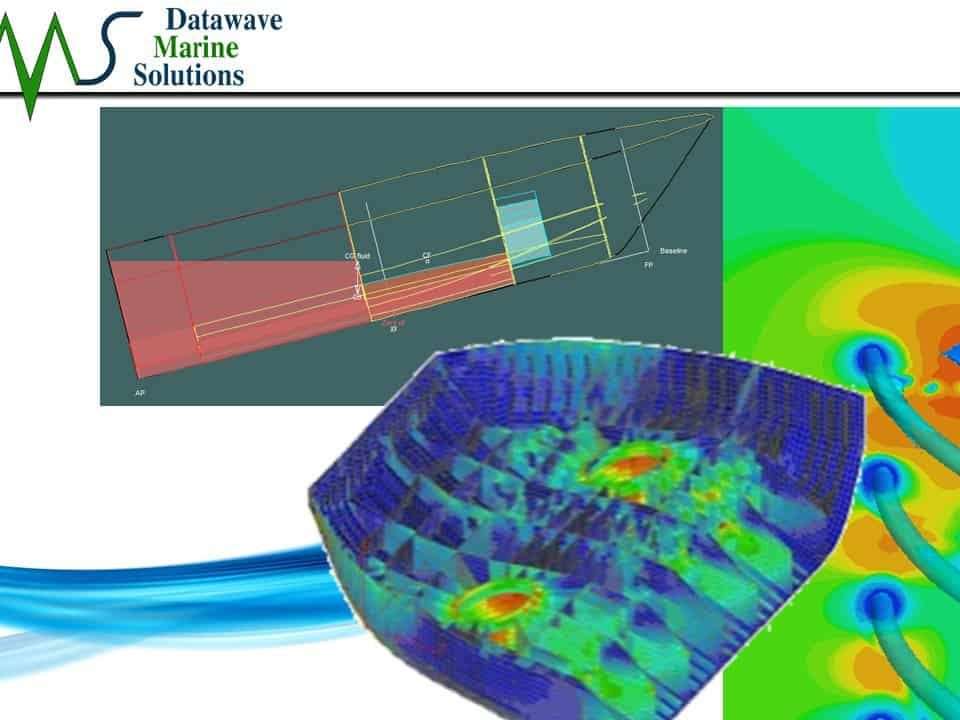